Sign up to get access to the Security Risk platform. Once you fill this form, check your email for confirmation.

Singapore moved into the second phase of its circuit breaker measures on June 19, with malls and non-essential businesses reopening for business. Depending on the location, the public response was either enthusiastic or lukewarm.

Either way, it’s clear that people are ready to be out and about again. And aside from their continued adherence to social distancing rules and wearing masks, there’s an expectation that life will proceed safely and peacefully – something that security systems enable and ensure.

Silent guardians in need of an update

“The thing with security systems is that if you actually notice them, then that means something is going wrong,” says Ian Stewart, CEO of security software-as-a-service company Security Risk.

CCTV cameras and patrolling security guards in malls, hospitals, condominium estates, and other everyday places go a long way toward providing peace of mind to the public. Such operational services also play an important role in maintaining the integrity of high-value locations such as military installations and mining and gas operations, among others.

However, the sector is sorely lacking in technological innovation, with 95% of security operations around the world still using paper-based and other manual solutions, according to Stewart. The technology focus in the industry has been mainly on hardware, which only really helps if there’s a person physically watching the cameras. “[Cameras are] good for monitoring and getting you notifications, but they don’t manage the key part of security; you don’t really have control of an area unless you have people there,” he says.

Also, if the person monitoring the video feeds has to check on something that the cameras picked up, that would leave no one left to continue the monitoring. The dynamic ability to see what’s going on and then allocate resources accordingly is currently missing.

Smart solutions do exist in the market, but cost and accessibility issues abound, given the heavy reliance on expensive proprietary hardware and licenses. Additionally, since many facilities that need security are located in remote areas, they must be able to operate in low-bandwidth environments where internet connectivity is spotty at best.

“Every site or location is a little bit different,” says Stewart. “A good system really needs to be flexible with regard to how it’s going to be used.”

These are the kinds of issues that Security Risk is trying to address with its Security Risk Manager (SRM) Platform. It is made up of four different applications that, when put together, provide a full suite of security functions ranging from scheduling guard patrols and enabling the instant filing of incident reports to sending quick response personnel, among others. SRM Portal, the key management interface, is web-based, with a mobile version in the works. The other three apps run on iOS and Android phones, covering the spectrum of what people use throughout the world.

“In the event of an incident, anyone who has the mobile app – guards, responders, clients – can send out an emergency alert,” Stewart explains. “Supervisors in the control room can assign responders, and once the incident is resolved, the personnel on the scene can write up and submit an incident report on the spot.”

All this data – incident reports, images, voice recordings – are stored on the cloud so clients will always be able to access it. “If you want to know what patrol was performed and what was found three years ago on a particular day and at a particular time, you can go and find that info any time,” he says. 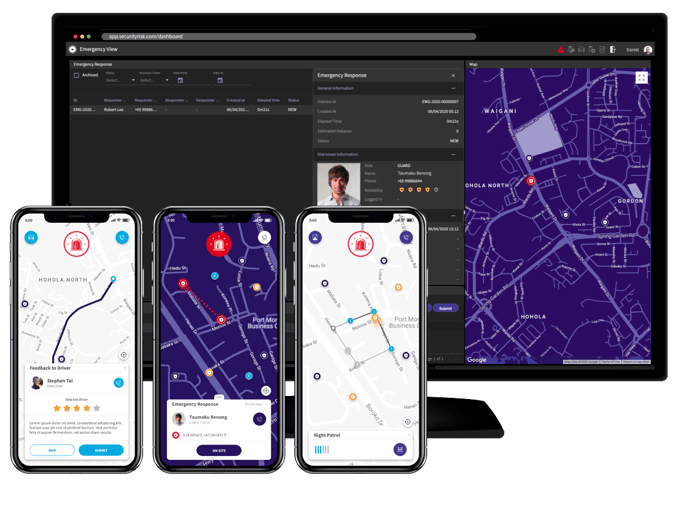 In order to build a system that offers all these functionalities but is also affordable and able to operate in difficult environments, Security Risk’s tech team put in time and effort to do research on security problems and define the exact parameters it wanted its system to adhere to. To this end, the team went to Timor Leste and Papua New Guinea to look at security operations there; the locations were chosen for their inherent infrastructural difficulties.

“Our CTO analyzed things from the technology point of view, deciding what the information and accountability flows should be, along with other things that were happening in the physical environment that we needed to recreate in the virtual environment,” says Stewart.

The team then went to local mobile phone shops, picking out the cheapest smartphones available so as to determine how scaled back, technologically speaking, the firm’s software needs to be in order to work anywhere in the world. The low price point for such phones also helps with cost and accessibility.

“We wanted to make sure that we would build a software solution that can tap on existing hardware, such as basic smartphones and laptops,” the CEO says.

The product took 12 months to build, followed by over a year of extensive testing, also done in Timor Leste and with local companies as test partners. Stewart says there have been no issues or interruptions to service yet. He also points out that since the app has a very simple user interface that features mostly icons and hardly any text, it’s quick and easy to deploy across different locations and among personnel of varying educational backgrounds.

Meeting the security needs of the future

The point of these stress tests was to make sure that the SRM platform can operate well regardless of the location, the related foundational infrastructure in place, or the size of the client.

“We’re working with five to six partners at the testing phase at the moment, some of which are relatively small, but others are mining and gas companies, or NGOs,” Stewart says. “So it’s quite a flexible piece of software. The sweet spot is for a medium-to-large security business, but it’s going to absolutely address even the needs of a small firm.”

The CEO also feels that in the current climate, with businesses thinking more about automating as many functions as possible to reduce the number of people on-site, the SRM platform’s ability to provide real-time information remotely will prove to be useful and important.

There may be some reluctance on the clients’ part to make the leap to smart solutions, given the prevalent entrenchment in the current manual and paper-based systems. But Stewart believes the return on investment and time from making that switch will create benefits that are bigger than the cost of making the transition.

“We are also putting a robust customer support system in place as the product goes to market,” the CEO says, emphasizing that they “will be there when a client wants to reach us.”

This article was first published on techinasia.com and produced by Tech In Asia Studios, which connects brands to Asia’s tech community.

Stay up to date with recent industry developments

Tell us what security issues keep you awake at night and we’ll share our latest thinking with you. We also offer access to a library of resources including eBooks, videos, and podcasts. To access the library, you can sign up free of charge here.